A short history of Pride Month 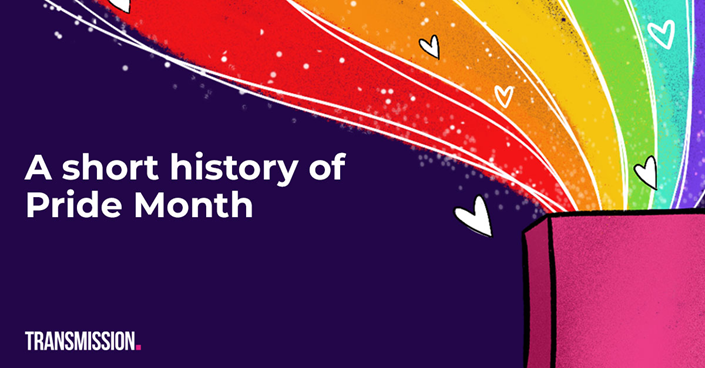 Gay Pride or LGBTQ+ Pride is the promotion of dignity, equality, and increased visibility of lesbian, gay, bisexual, and transgender (LGBTQ+) people as a social group.

Pride, as opposed to shame and social stigma, is the predominant outlook that bolsters most LGBTQ+ rights movements. LGBTQ+ stands for lesbian, gay, bisexual, and transgender, while the '+' is an inclusive symbol meaning 'and others' to include people of all identities.

It's a celebration of people coming together in love and friendship to show how far LGBTQ+ rights have come and how there's still work to be done in some places. Pride events range from solemn to carnivalesque and are typically held during LGBTQ+ Pride Month or other periods that commemorate a turning point in a country's LGBTQ+ history. For example, Moscow Pride in May for the anniversary of Russia's 1993 decriminalisation of homosexuality.

A short history of Pride

Lesbian, Gay, Bisexual, Transgender, and Queer (LGBTQ+) Pride Month is celebrated every year in June to honour the Stonewall Riots that took place on 28 June 1969 – a rebellion led by trans women of colour that acted as a tipping point for the Gay Liberation Movement in the United States.

However, the Stonewall Riots weren’t the first time the LGBTQ+ community organised to stand up for their cause. The Society for Human Rights was founded by US Army soldier Henry Gerber in 1924 and produced the US’ first-ever gay rights newsletter, ‘Freedom & Friendship’ – inspired by the work of the Scientific-Humanitarian Committee, an organisation dedicated to overturning Germany’s anti-homosexual rulings at the time.

In the 1950s, Harry Hay founded The Mattachine Society in Southern California to provide a space for gays and lesbians to gather and discuss their experiences as homosexuals. While The Daughters of Bilitis was one of the first lesbian organisations ever established in the US, formed in 1955 by Phyllis Lyon and Del Martin.

And in the 1960s, riots at both Compton’s Cafeteria in San Francisco and Cooper Do-Nuts in Los Angeles represented the first time that LGBTQ+ people stood up against police harassment.

Take a journey through time to explore more of the obscure political history of Pride with them.'s video featuring Billy Porter on the subject below.

Today, celebrations include pride parades, picnics, parties, workshops, and concerts. LGBTQ+ Pride Month events attract millions of participants around the world. Memorials are also held throughout the month for those members of the community who have been lost to hate crimes or HIV/AIDS.

The purpose of the commemorative month is to recognise the impact that lesbian, gay, bisexual, and transgender individuals have had on history locally, nationally, and internationally.

Pride Month is about acceptance, equality, celebrating the work of LGBTQ+ people, education in LGBTQ+ history, and raising awareness of issues affecting the LGBTQ+ community. It also calls for people to remember how damaging homophobia was and still can be.