Self-promotion skills for women in business 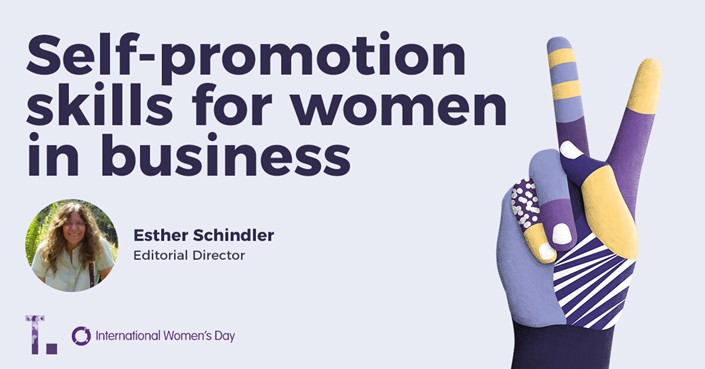 These six tips might help you get noticed at work – in the best possible way.

International Women’s Day exists to celebrate women’s achievements and to encourage more of them. But you might create wonderful things and discover that nobody notices. Alas, women – especially technical women – often don’t get the corporate or industry attention they’ve earned.

“Women are rising to the moment as stronger leaders,” but their work is going unrecognized, points out the latest Women in the Workplace report from McKinsey, in partnership with LeanIn.Org.

Why? Perhaps it’s a matter of training, when young women aren’t taught the same business skills as their male counterparts. Or perhaps women perceive (correctly or otherwise) that assertive behavior may be misinterpreted.

The barrier may be as simple as: They don’t know what works. Well, we can do something about that. When I asked several successful women, at Transmission and elsewhere, to share the useful advice they received, I discovered that their experiences fell into several distinct categories.

Perhaps these suggestions can help you learn to toot your own horn.

Accept that it’s okay to behave this way

The first obstacle to changing your behavior is giving yourself permission to do so. Even if you’re not afraid to seem “unladylike” (whatever that is), you may not know how to do self-promotion. Do I brag? Boast? Grab all the glory? That seems rude.

For Joy, a senior software engineer, “It got a lot easier when I did the mind shift away from ‘making myself look good.’” Instead, she adopted the attitude that she was ensuring other people knew who could help them.

Take credit for what you do

This is simple: Put your name on your work. People don’t always notice who created that template, project plan, code module, or document. When they do pay attention, though, they should be able to recognize the source of the expertise and discover whom to contact when they want more of it.

For instance, one woman gained more recognition after she started putting her name on the calculators she created. “I became the source to go to on those calculators,” she explained. “And I also got more interesting projects.” That signature helped her become a core member of her team – at least for that task.

Cathy, a tech lead, was given advice during a job interview that stayed with her: To take credit for the things she did. “I had to change my language from team-based achievements to my achievements or leadership.”

It’s easiest to think about documenting your achievements on your résumé or LinkedIn profile, but don’t limit the practice to when you’re job hunting; get that documentation ready for your next performance review. Write about the projects you led. Include numbers, hard skills, grants you’ve won, project descriptions and outcomes, presentations given, tools designed. “You can talk about the details of your project, issues faced, how you overcame, outcomes, etc., and then your prospective employers can start talking about similar projects of their own,” Cathy told me. “Then you can nerd out.”

It’s also fine to take credit for your contribution without implying that you acted alone. Sarah, a lead project manager at a music distribution company, was taught to subtly anchor her role in a project without sounding defensive. “When someone talks about the impact of X but clearly doesn’t know you were the one driving the initiative,” she said, “you can say, ‘I’m so proud we were able to do that. It was really hard to [whatever] but when I found the connection between [this thing] and [that thing], it all really came together.’”

Use your own voice

Cassie, who now has a hockey podcast, was inspired when someone told her, “Speak up in meetings, and calmly state what you have to say. You have just as much right to voice your opinion as your male colleagues do.”

Even if you’re shy, talk on your own behalf. If your project involves a presentation, suggested one engineer, be the presenter. If your boss or another team member wants to speak instead, ask them to allocate time for you to show a few slides. Make the case that you should discuss your own work, she added. It’s a project that you know the details about; you are invested in the project; you want to control how it’s presented.

Successful self-promotion doesn’t mean hogging all the attention. Do what you can to empower others.

To advance and grow, advised one scientist’s mentor, you have to delegate some of your job duties “And sometimes that’s hard!” she added. “But once you release your tasks, you take on other, bigger tasks, and eventually progress into more senior roles.”

Publicly elevate others who have a hand in your work, agreed another technology expert. Praise people for their contributions, publicly or privately. Tell the people who can take action on their success. “Reach out to the managers of others who contributed to your project,” she advised. Make sure you say how grateful you are; include why the contribution is important and the project’s value. “When you elevate others for their contribution to your project, it draws attention to you and your accomplishments as well as them. Everyone wins.”

When a project wraps up, the scientist suggested, send a “mission complete” email message, listing out contributions, the people who made a difference, and their impact on the project. And be sure to cc the relevant higher-ups so they know about the achievements.

Perhaps it sounds counterintuitive that “self-promotion” advice emphasizes helping other people rather than talking about yourself. But it’s important to build a supportive network of friends in the field (particularly other women) who publicly congratulate you on your achievements. If nothing else, people remember your name when new opportunities come along.

Ask for what you want

One benefit of taking credit for your work is the boost to your self-confidence. No matter how much you suffer from imposter syndrome, your “Look what I did!” list can remind you about what you actually accomplished.

“Swagger a little” was early advice given to Robin, a longtime journalist who now runs a virtual events consultancy. “Having self-confidence in your decisions is super important,” she said. “Women tend to overthink all of their decisions. I found that the key was making a decision (that was reasonable and in line with my other decisions) and then sticking to the course.”

When you’re self-confident, it’s easier to ask for what you want – and get it. Again, it’s easiest to see that in pay and promotions, but it’s equally true elsewhere. If you don’t let people know what you want, how can they help you get it?

“A communications professor once told me that salary is always negotiable,” a project manager said. “I had never considered that before and had taken whatever pay was handed to me.” Other women echoed this sentiment: “Don’t be afraid to leave for more money,” and “Ask for raises. Get what you are worth.”

Don’t work in the dark

When one technologist moved to tech leadership – she’s now a data architecture governance director at a financial services organization – the advice that helped her move forward was, “never work in the dark.”

The phrase has multiple meanings, she explained.

What’s the advice that helped you improve your self-promotion skills? Tell me about it on Twitter at @estherschindler.