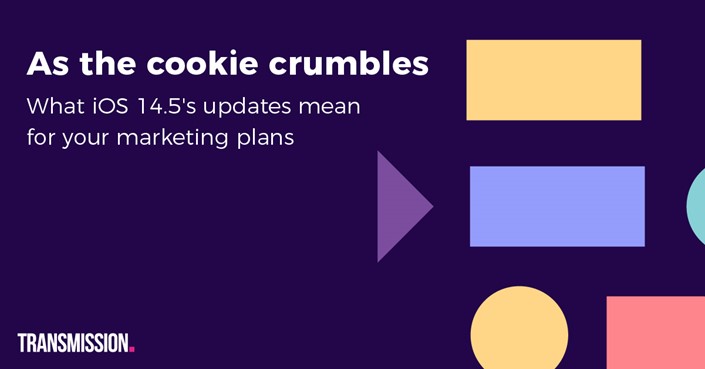 Apple’s changing everything about how mobile apps track users. Here’s what’s going on, why, and – most important – what the change means to your marketing plans.

The death of third-party cookies and mobile tracking has been a discussion item among marketers for a long time. However, the impending doom became more real in March 2021, when Google and Apple made announcements regarding their privacy plans. If your marketing programs track users, the changes had an immediate effect.

Google made two announcements. In January 2020, Google announced that by the end of 2022 Chrome would no longer support third-party cookies. And in March 2021 the company announced its intention to end behavioral targeting; it will not develop or allow alternative identifiers that replace cookies on its ad products by third parties. While Google helped create and grow the digital ecosystem that relied on tracking and targeting ads across the web, due to pressure from regulators around data privacy and antitrust, the company cut off an efficient targeting method.

In April 2021, Apple announced that with iOS14.5 it would implement App Tracking Transparency. Cross-app tracking allows advertisers to target ads based on behaviors on other mobile apps – and obviously that matters a lot to marketers who use them for audience creation and conversion tracking. The privacy-centric feature now requires a deliberate opt-in from users to permit software to track them across apps; that is, developers must explicitly ask for permission to track users for ad targeting.

What perpetuated these changes?

Though the third-party cookie was not initially developed with malicious intent (at least in regard to consumer privacy), it evolved to encompass the role of tracking online user behavior for advertising use. The technology of third-party cookies has become more complex since 1994, and consumer privacy concerns have grown significantly (for good reason) since the idealistic days of the early internet. Consumers are increasingly anxious about the way they are tracked online.

Over the past few years, governments have established laws to promote online tracking transparency and consumer data privacy protection. The 2018 General Data Protection Regulation (GDPR), which outlined a new set of standards surrounding consumer data protection, is the reason websites everywhere now prompt users for permission to allow cookies. The state of California followed suit with the California Consumer Privacy Act (CCPA), which went into effect in 2020. These pieces of legislation caused businesses everywhere to conform by establishing transparency and compliance for the benefit of consumer privacy.

How will the industry move forward?

Federated Learning of Cohorts (FLoC) proposes a new way for businesses to reach people with relevant content and ads by clustering large groups of people with similar interests. This approach effectively hides individuals “in the crowd” and uses on-device processing to keep a person’s web history private on the browser.

iOS14.5, released the week of April 26, automatically opts users out of tracking. Thereafter, users must actively agree to permit a mobile app to use their Apple Identifier for Advertisers (IDFA) and any other identifiers. These identifiers can include hashed email addresses. This forces apps to be more transparent with how they use and track users’ data. If the user does not grant permission, outside data cannot be used and data cannot be shared outside the app.

This is not generating a knee-jerk acceptance in the user community. According to data collected by Flurry Metrics, 96% of iPhone users opted out of app tracking in the latest iOS 14.5 update. Businesses of sizes have to adapt quickly.

How does this affect Transmission’s activation strategies?

iOS14.5 affects targeting. It also affects the conversion data resulting from users who see ads inside an app, including Facebook, LinkedIn, and View Through Conversions measured by floodlights in ads served in app. This does not affect Chrome web-based advertising, as that data is housed in the Chrome app. (However, Google Analytics and site APIs are not affected; they can still be used to measure on-site actions.)

Prepare yourself for conversion decreases that are registered in the platform.

The effect you’re most likely to notice is that retargeting audiences will shrink. The IDFA that identifies users across apps and platforms will not be available unless a user grants tracking access. Campaigns based on lookalike audiences may also suffer. The loss of conversion data gathered from an advertiser’s website may no longer be able to trace the full path of conversion. This would cause targeting systems to have less data with which to develop lookalike audiences.

Not every activation plan changes. The LinkedIn on platform is unaffected, for example. LinkedIn has its own opt-in data, which marketers can continue to target by account name, job title, seniority, and so on.

Nor do the App Transparency policies touch every marketing program. As of April 2021, only 21% of Transmission’s programmatic impressions in 2021 were on iOS; 71% of impressions are on a Chrome browser. In other words, most impressions are being served outside the Apple ecosystem; do not expect programmatic buys in the short term to be affected.

For most of our clients, the immediate concern is with iOS14.5; Apple made that change as of April 26. Google’s changes are still a year away.

But privacy-related policy changes aren’t surprising. Transmission and the industry have been preparing for them for years.

In the short term, Transmission will help clients respond with a greater focus on the following:

But we all know that Apple, Google, and other online platforms are responding to pressure to protect consumer privacy. We can work with you on long-term activation projects, too. Among the possible directions:

Users care about protecting their privacy. As Apple CEO Tim Cook said, “Technology does not need vast troves of personal data stitched across dozens of websites and apps in order to succeed. Advertising existed and thrived for decades without it.”

It’s inevitable that tech companies will respond technologically to change the ways that advertisers target their audiences. As those changes occur, Transmission will be here to help its B2B clients adapt. Let us know if you want to talk.